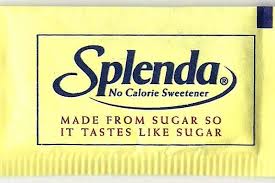 Today on Ask the Nathropath, Mark Kibyuk breaks down artificial sweeteners and shares his recommendations on what you should be using.

A very touchy subject, through my countless study groups, conferences and meetings with health professionals the consensus is always the same…

Aspartame is the most dangerous substance in our food supply today!

Aspartame is the technical name for brand names such as NutraSweet, Equal, Spoonful, and Equal -measure. It was discovered by accident in 1965 when James Schlatter, a chemist, was testing an anti-Ulcer drug. He was working for G.D. Searle Company at the time.

When aspartame is digested, the body breaks it down into aspartic acid, phenylalanine and methanol” – and it is methanol that is one of the root problems with aspartame.”Coca Cola”.

Aspartame is a man-made chemical which closely mimics naturally occurring chemicals and proteins in the body; in particular is phenylalanine, an amino acid (protein building block), another is Aspartic Acid another amino acid found in foods, and a Methyl group which is a chemical compound of hydrogen and carbon, this group is what gives the majority of the sweetness to the chemical.

So as you consume more and more aspartame the body starts to show toxic symptoms which can range from dizziness, nausea, forgetfulness, fatigue, sugar cravings, insulin sensitivities, GI upset, brain fog, ringing in the ears, in some cases birth defects have been noted.

In my opinion if you are using aspartame in any foods you should get off it as soon as you can. They do have an addictive property and you should seek the advice of a health care professional or your medical doctor to get off them as soon as possible, your body is hurting from them and needs to be healed.

We’re getting better, but still not good. Sucralose is made from a chemical reaction between glucose (sugar) and fructose (fruit sugars). In the five step patented process of making sucralose, three chlorine molecules are added to a sucrose or sugar molecule. A sucrose molecule is a disaccharide that contains two single sugars bound together: glucose and fructose. It is interesting to note that the body has no idea how to process this molecule, and it results in the molecule having 0 calories.

This chemical is used many for its sweetness and taste profile, however the body is still not realizing what it is eating, so it can have symptoms associated after consuming it for periods of time. Sympotoms include rashes, headaches, forgetfulness, as well as a host of others.

How do you know if you have symptoms? Stop eating it for 2-3 weeks and notice what your body does in response, you may notice many changes that occur, you should seek the advice of a medical professional if you feel this is something you are struggling with.

We will see these ingredients on labels which end in –OL.

What is the difference?

These molecules usually start as some kind of sugar, mostly sugar from corn, then they go through an amazing transformation through chemical reactions which leave the molecule having fewer calories, tasting sweet but don’t be fooled, the body still sees them as foreign and has no idea what to do with them.

Sugar alcohols are slowly and incompletely absorbed from the small intestine into the blood. Once absorbed they are converted to energy by processes that require little or no insulin. Some of the sugar alcohol is not absorbed into the blood. These pass through the small intestine and are fermented by bacteria in the large intestine. Thus, overconsumption may produce abdominal gas and discomfort in some individuals.

This artificial sweetener has received a GRAS (generally recognized as safe) in 1996. However it has been on the market since 1983. This product is used in many different drinks, foods and even added to real foods to help with sweetness levels and to stabilize on shelves. It is fascinating to note that the body does not process this molecule one bit for energy. It actually cannot enter the cell’s energy production part called mitochondria. The molecule upon eating will get converted into fatty acids and they will be mobilized and stored in the liver and other fatty tissue. Most people use this when they have insulin issues as it does not stimulate insulin receptors.

Well yes, however these fruits have sugars starches, enzymes and digestive aids which will help the body process this fructose, when you strip away the necessary molecules for digestion you are left with an inability to do anything digestive wise with this molecule.

When HFCS is made is goes through many chemical reactions one in which causes the molecule to flip polarity, this makes the molecule different from that found in nature in fruit.

For me it is interesting to note that when someone consumes HFCS as it cannot be used for energy, it stores as fatty acids or FAT.

So many people who drink and eat diet foods, they actually gain weight and fat.

SO by eliminating these foods we can have some major improvements happen in health.

So What Should You Use?

There is no substitute for what nature has made like organic raw honey, 100% organic maple syrup and Stevia.

I get asked a lot about Stevia.

Stevia, is a leaf which is grown in many South American countries which has been used for centuries by indigenous people to sweeten their foods. This is a natural sweetener that is about 30-300 times as sweet as sugar. There have been no reported issues as of yet regarding its use, HOWEVER….it is important to note that there are imitators on the market, so I always recommend a Stevia leaf extract which you can get at health food stores.

In closing, glucose is the energy currency in the body so when we consume it in moderation it is fine. The issue is that the average North American consumes 150 pounds of sugar per year! That is a staggering number!! The body has to work so hard to break this down it is amazing, hormones fluctuate, and bacteria which lives in your intestines feed and multiply like crazy which causes immune and digestive troubles. When Sugar is broken down it is very acidic, which can lead to joint, bone, teeth, eye and skin related issues.

So if you are a sugaraholic cut your dose in half first. Try to choose foods that do not have copious amounts of sugar added, choose real foods which do not have labels, drink plenty of water and exercise. The more you exercise the more you will mobilize sugars which will be used for energy and the result will be lowered fat stores which everyone wants.

People who struggle with diabetes need to consult with a health professional, as there are so many different blood chemistry changes that occur that it needs to be closely monitored.

To there you have it LYL followers the bitter sweet truth about these destructive substances and what they are really doing to your health and your waistline.

Remember you are what you eat!