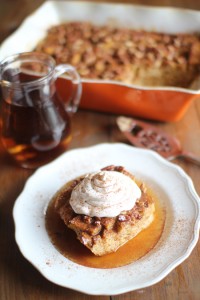 To prepare the bread, cut crust off bread, and discard the two end pieces. Cut the bread into small cubes and add to baking dish.

Pour egg mixture over bread, and make sure the egg mixture evenly soaks all of the bread. Cover with foil and put in the fridge overnight (or for at least four hours).

When you are ready to bake your French toast bake, remove from refrigerator, and let stand at room temperature for 30 minutes.  Meanwhile, preheat oven to 350 degrees.

Before placing the French toast in the over, sprinkle with remaining cinnamon and pecans.

Bake uncovered, for 55-60 minutes, or until a knife inserted in the center comes out clean.

Removed from over, cut into 16 equal pieces and sever warm with maple syrup and top with ‘whipped cream’ if desired.